This is the first of several articles in which I’ll show how to setup a Docker based home automation platform using a Synology NAS. Running your home automation components using Docker containers is a lightweight alternative to bare metal or virtual machine implementations. Because of this they can be ran on many devices that are limited in CPU and memory resources such as NASs used by the average home user. An advantage of using a NAS for HA is they provide a higher level of reliability and capacity for device storage compared to SBCs like the Raspberry Pi which use SD cards that are limited in capacity and prone to failure. I chose to use the Synology NAS platforms for these articles because I have been using their products for many years to provide storage and local cloud services for my home network. So, if you already have a NAS that’s running 24/7 and is capable of running a few Docker containers you’ve got the makings of a reliable HA platform.

For this project I’ll be using the Synology DS-720+ NAS which will be dedicated to home automation, but if you want to also use your NAS for storage and cloud services there are bigger models such as the DS-920+ or DS-1520+.

The Synology Docker Package will be available to install on most NAS models with the exception of some of the entry level models. Before you start, check to make sure that it supports your specific model of NAS.

Install Docker on the Synology NAS

If your Synology model supports the Synology Docker Package then the installation process will be pretty easy. After you log into the DSM of your NAS, open the Package Center app, and either browse or use the search tab to find the docker package and then click install.

This section describes how to make the tasks that the NAS will run upon boot-up to create links on the NASs filesystem for the docker containers to use.

Issues may occur when some Docker containers are started but their timezone is not the same as your local timezone. Two ways to pass the timezone to a new container is specify the timezone as an environment variable in the runtime command or to map the TZ file on the host to the one in the container. It’s usually easier to specify environment variables, but if a container does not heed them then mapping files is the last resort. So, if you do experience time related issues with a container then configuring these tasks on your NAS can help.

During the Docker package installation it has created a shared folder called “docker” on your NAS’s file system. This is where we’ll create our links for the Docker containers to use. Specifically, we’ll create links in the docker folder to the NAS’s /etc/TZ, /etc/localtime, and /var/run/docker.sock files. We have to create links because the docker containers are not allowed to access many areas of the Synology OS such as the /etc directory were these files live.

To make a task that creates our TZ (timezone) link upon NAS boot-up first login to DSM, go to Control Panel, Task Scheduler, click Create button, and select Triggered Task and User-defined script from drop down box. Populate the two config windows like so and click OK:

In the General tab enter the name of your task:

In the Task Settings tab enter the command shown in the Run Command / User-defined script box: 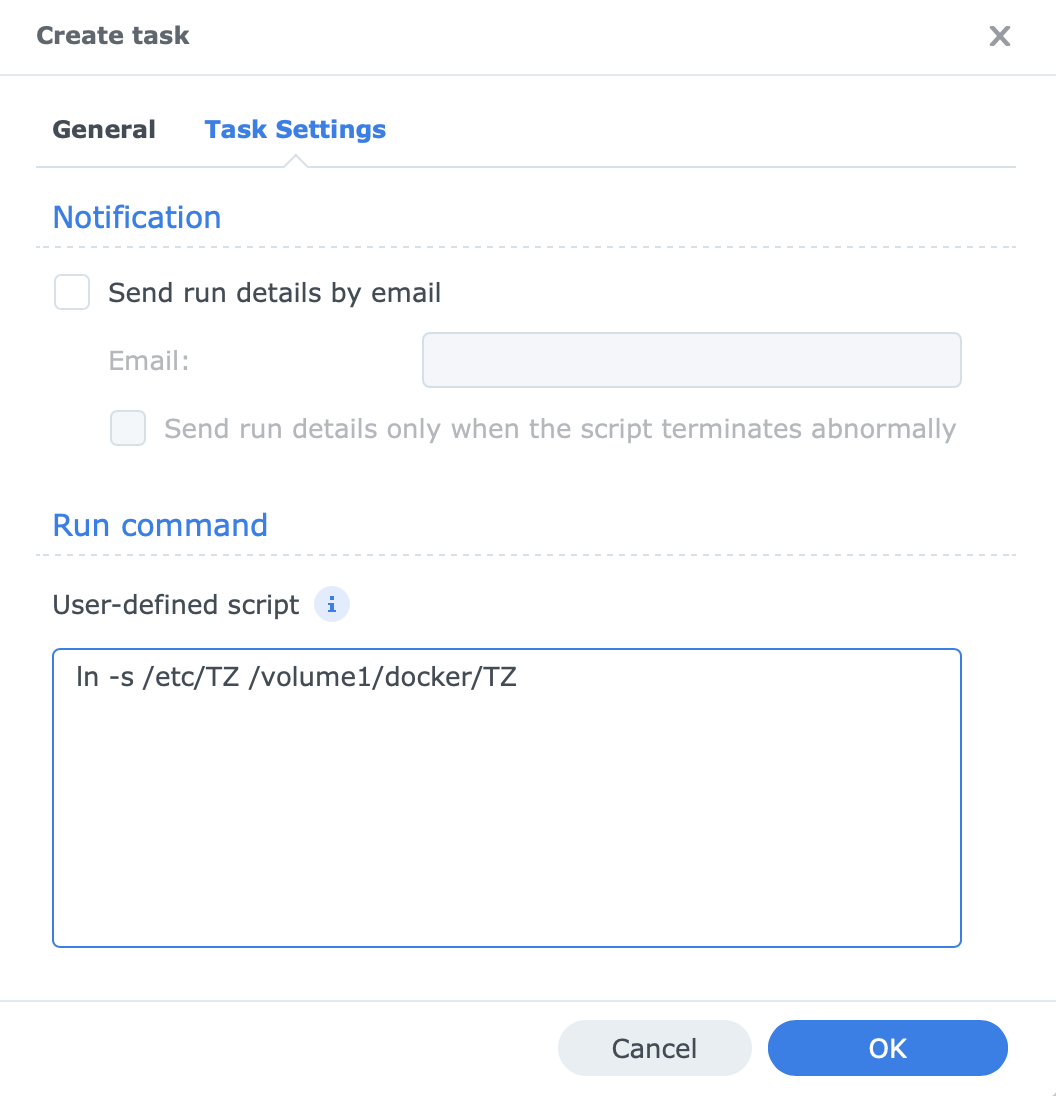 Next create another task similar to the one you just made for the timezone link (above), but instead this task will create a link for the localtime file, make the name of the Task something like “Docker localtime Link”, and use the script below:

And lastly create another task similiar to the previous ones, but instead this task will create a link for the /var/run/docker.sock file, make the name of the Task something like “Docker Sock”, and use the script below:

When you’re done you should see all three tasks listed in the DSM Tasks app. In order for your links to be created you can either manually run them using the Run button in the Tasks app or reboot your NAS.

We’ll need to enable SSH on our NAS in order to install Portainer. While logged into your DSM desktop open the Control Panel app and go to Terminal & SNMP and in the terminal tab click the Enable SSH Service checkbox.

Once SSH is enabled you’ll be able to use PuTTy or WinSCP (Windows) or a terminal window (Linux or MAC) to SSH into your NAS using it’s IP address or FQDN and your admin username and password.

This section describes how to install Portainer CE (Community Edition) on our NAS. The Synology Docker package does provide a GUI to deploy and manage Docker containers, but it’s pretty basic so I prefer to use Portainer instead. Portainer CE is free to use and provides a better UI as well as support for stacks which are a way to configure containers via YAML. Portainer itself runs as a docker container and we’ll have to ssh into our NAS and use the command line to install it.

SSH into your NAS and enter the following command to verify docker is installed and you can run commands as super user:

Because we used sudo you should get a password prompt - password is the same as your admin account you used to SSH in. If the command returns the docker version you’re good to go.

Also, Portainer needs access to docker.sock so verify the tasks you created in previous step worked by listing the contents of the docker directory:

You should see the following files:

Next, create the volume that Portainer Server will use to store its database:

The command should return something similar to this:

Now that Portainer is installed go ahead and verify it’s running by entering the docker ps command:

And you should see output similar to this:

Congrats! You’ve created your first docker container! Go ahead and log into Portainer by opening your web browser and going to the URL below to start the initial setup for Portainer. By default Portainer uses a self signed certificate so you’ll likely be warned of such on your first visit. 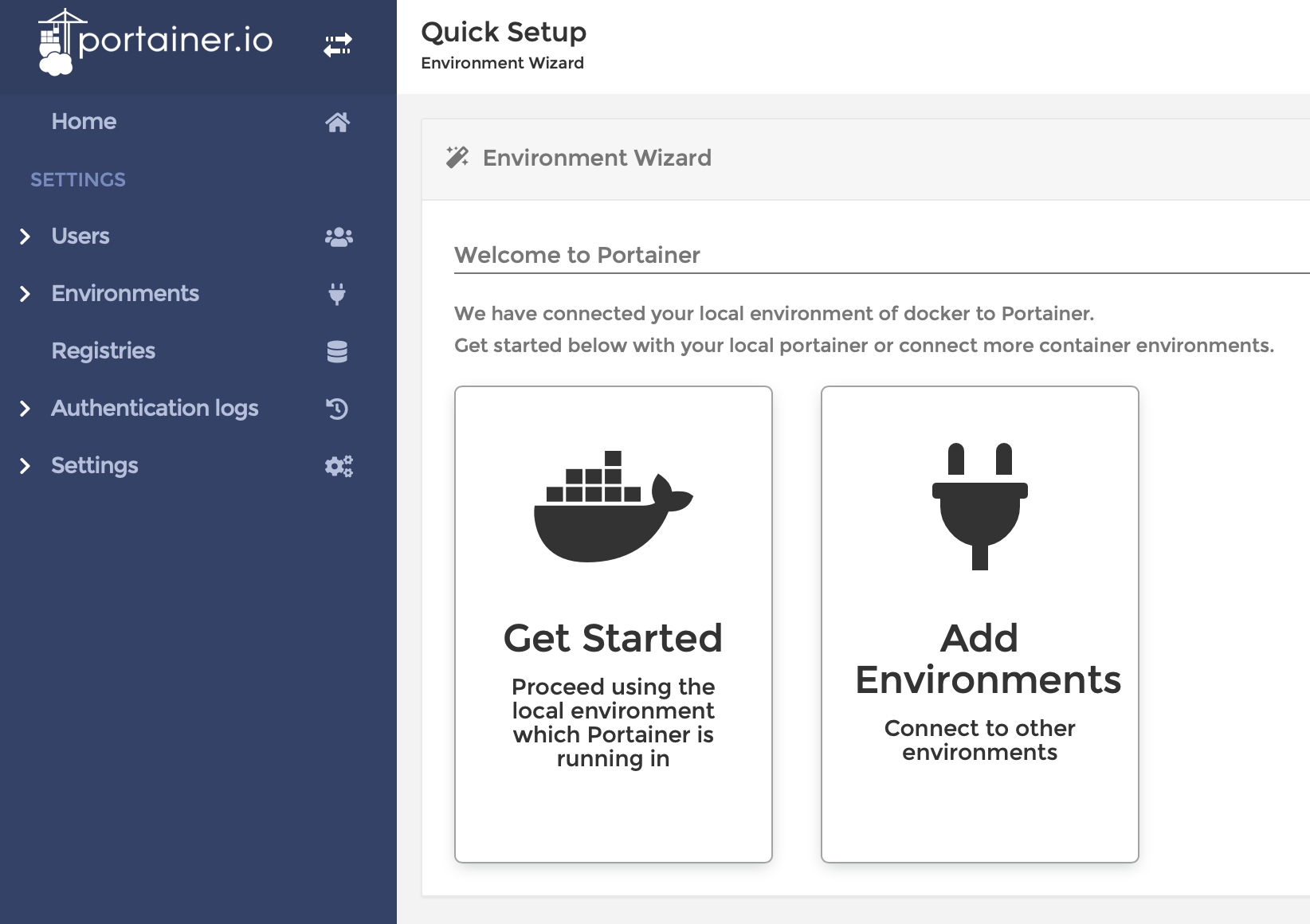 And there ya go, you’ve got a working Docker engine to run your home automation containers and a great GUI to manage them.

Tonight we observed the full lunar eclipse. Unlike previous lunar eclipses we’ve seen, the reduction of light being reflected from the moon and orange coloration of tonights event was very noticea...

Today I relocated the antennas we use to receive the local TV stations. The days of having a dual band VHF/UHF TV antenna are long gone now that nearly all the TV stations have switched to UHF. B...

Just completed my “doghouse” build to help protect backup generator from the elements. Building the foundation for the little shed was challenging due to how much the ground slopes, but worth it. ...